A fast Julia implementation of the least square density difference (LSDD) method. It is used to detect changepoints in time-series or to infer wether or not two time-series come from the same underlying probability distribution. The LSDD method was developped in the article Density-difference estimation from M. Sugiyama, T. Suzuki, T. Kanamori, M. C. du Plessis, S. Liu, and I. Takeuchi. in 2013.

, the LSDD method directly modelizes the difference to compute its L2 norm. This approach has good convergence properties and is more accurate than computing the KL-divergence of

after estimating them from scratch.

In practice, the closer the LSDD value is to 0, the more similar

One ends up with a time-dependant LSDD "profile", and threshold can be set to detect changepoints when exceeded.

To infer if two time-series come from the same underlying probability density, use the lsdd(ts1, ts2) function :

To compute the LSDD profile of a time-series, use the lsdd_profile(ts; window = 70) function :

Finally, to run an automatized changepoint detection, you can use the changepoints(ts; threshold = 0.5, window = 150) function. 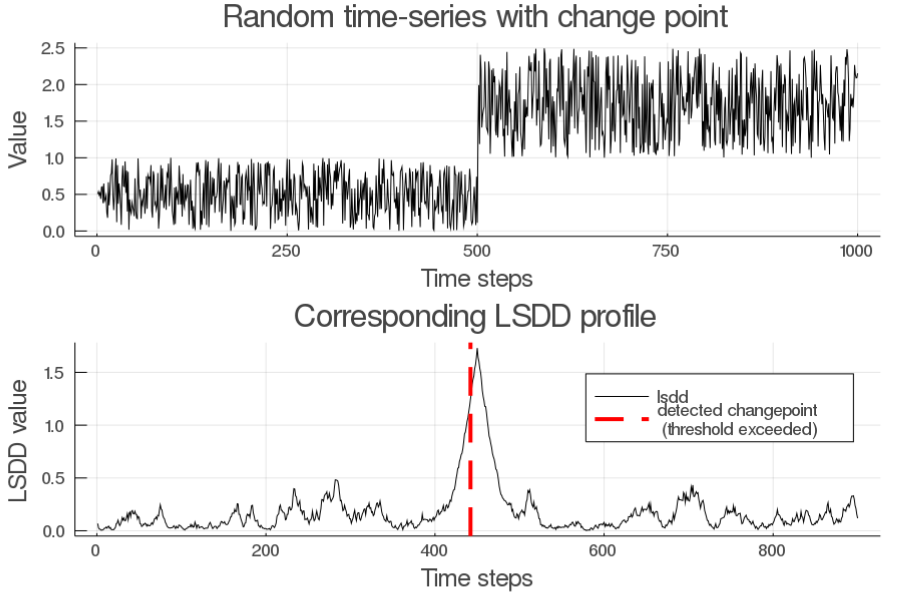