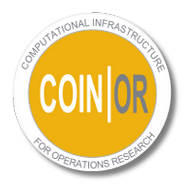 CSDP.jl is an interface to the COIN-OR SemiDefinite Programming solver. It provides a complete interface to the low-level C API, as well as an implementation of the solver-independent MathProgBase and MathOptInterface API's.

Note: This wrapper is maintained by the JuMP community and is not a COIN-OR project.

You can either use the system LAPACK and BLAS libaries or the libraries shipped with Julia. First, make sure that you have a compiler available, e.g. on Ubuntu do

To use the libraries shipped by Julia, simply do

To use the system libaries, first make sure it is installed, e.g. on Ubuntu do

Note that if the environment variable CSDP_USE_JULIA_LAPACK is not set, it defaults to using the system libraries if available and the Julia libraries otherwise.

The primal is represented internally by CSDP as follows:

CSDP will terminate successfully (or partially) in the following cases:

Remark: CSDP considers that X ⪰ 0 (resp. Z ⪰ 0) is satisfied when the Cholesky factorizations can be computed. In practice, this is somewhat more conservative than simply requiring all eigenvalues to be nonnegative.

The table below shows how the different CSDP status are converted to MathProgBase status.

If the printlevel option is at least 1, the following will be printed:

The CSDP options are listed in the table below. Their value can be specified in the constructor of the CSDP solver, e.g. CSDPSolver(axtol=1e-7, printlevel=0).

Getting the CSDP Library

The original make-file build system only provides a static library. The quite old (September 2010) pycsdp interface by Benjamin Kern circumvents the problem by writing some C++ code to which the static library is linked. The Sage module by @mghasemi is a Cython interface; I don't know how the libcsdp is installed or whether they assume that it is already available on the system.

That is why this package tries to parse the makefile and compiles it itself on Unix systems (so gcc is needed).

For Windows, a pre-compiled DLL is downloaded (unless you configure the build.jl differently).