This currently requires the master branch of both Reactive and Interact.

The Interact package brings interactive widgets to IJulia notebooks. In particular, the @manipulate macro makes it trivial to define simple interactive graphics. Interact can animate graphics using Gadfly, PyPlot, or Winston. For more fluid graphical animations, the Patchwork package can be used to efficiently manipulate SVG graphics, including those created through Gadfly,

The GtkInteract package modifies Interact's @manipulate macro to allow interactive widgets from the command-line REPL using the Gtk package for the widget toolkit. This package then allows for similarly easy interactive graphics from the command line. It is limited to those packages that can write to a cairo backend. These include Immerse (which means Gadfly graphics can be used) and Winston. (The Plots package may not work, as the immerse backend is deprecated.) Plotting packages could also write output to graphic files which can be shown.

The basic syntax is the same as for Interact. For example,

This produces a layout along the lines of: 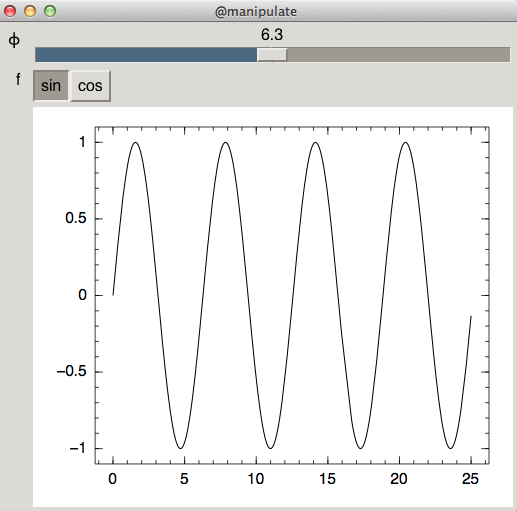 [But wait! This example doesn't currently work under v0.5 of Julia as the function values in the toggle buttons cause issues. This should be fixed soon. But until then you can work around this if you want by using a new type, for example

and then in the above use

When used directly, the figure includes the toolbar features provided by Immerse.

Text output can also be displayed (though not as nicely as in IJulia due to a lack of HTML support):

The basic idea is that an output widget is chosen based on the return value of the evaluation of the block within the @manipulate macro. Returning a value of nothing will suppress any output widget being chosen. In this case, the body should have side effects, such as explicitly creating a graph. Some of the provided examples illustrate why this might be of interest.

The basic widgets can also be used by hand to create simple GUIs:

More complicated layouts are possible using a few layouts similar to those in the Escher package:

We can use Reactive.mapto propagate changes in the controls to update the graphic window:

This basic usage follows this pattern: we map over the input widgets and within the function passed to map (through the do notation above), we push! some combination of the values onto one or more output widgets, such as cg above. The @manipulate macro basically figures out an output widget from the last value found in the code block and pushes that value onto the output widget.

Until this package lands in Julia's METADATA it should be installed via "cloning":

This package requires Gtk (for GTK+ 3, not GTK+ 2). See that page for installation notes.

[This is currently broken on a mac, segfaulting with the interactivity!]

There is experimental support for plotting with PyPlot. Using PyPlot requires an extra wrapper function, called GtkInteract.withfig. (The withfig function is defined in PyPlot and modified here, hence the module qualification.)

It can be a bit slower, as this does not draw onto a canvas, but rather creates an image file and displays that on each update. In the background pygui(false) is called. Not doing so leads to a crash on some machines.

(To copy-and-paste code that works with Interact simply requires some local definition such as withfig=GtkInteract.withfig.)

A MainWindow has a field, refs, to which you can push! any Reactive signals that you want to preserve for the lifetime of the window. Upon destroying the window, these signals are closed. Timers like fps are particularly important to "register" with refs: otherwise, you may keep using CPU resources even after you close the window, until the next garbage-collection event.

Now if you display w, and then close the window, frametimer will no longer be active.

In addition to the widgets in Interact, the following new widgets are provided: