MixedModeDebugger is a debugger that runs in a mixture of modes: both compiled and interpreted. It aims to achieve the best of both worlds. We can constrast this to MagneticReadHead which is purely compiled; and against JuliaInterpreter / JuliaDebugger, which is purely interpreted.

How is it different from MagneticReadHead ?

MagneticReadHead is fully compiled. The whole code being debugged is actually rewritten (at the IR level) to include the debugging functionality. This allows it to be pretty fast, at runtime. However, because of how extensive the code tranformation is, it can take an immense amount of time to compile. Infact, it might take orders of magnitude comparable to the head death of the universe to compile.

MixedModeDebugger uses a far lighter transform during its compiled-mode, just enough to check if a method being called is one with a breakpoint set on it. So it doesn't introduce anywhere near as much overhead.

How is it different from Debugger.jl ?

Because Debugger.jl is always interpreted, it is much slower all the time. Where as MixedModeDebugger.jl can run at compiled speeds, until it hits a breakpoint.

This package is still experimental, and so is not registered. It may even be upstreamed directly into JuliaDebugger at some point.

Installation is thus via:

Note: this package requires Julia 1.3+ as it relies on the fix to the #265 issue for Cassette.

Usage is as per JuliaDebugger, so just refer to those docs 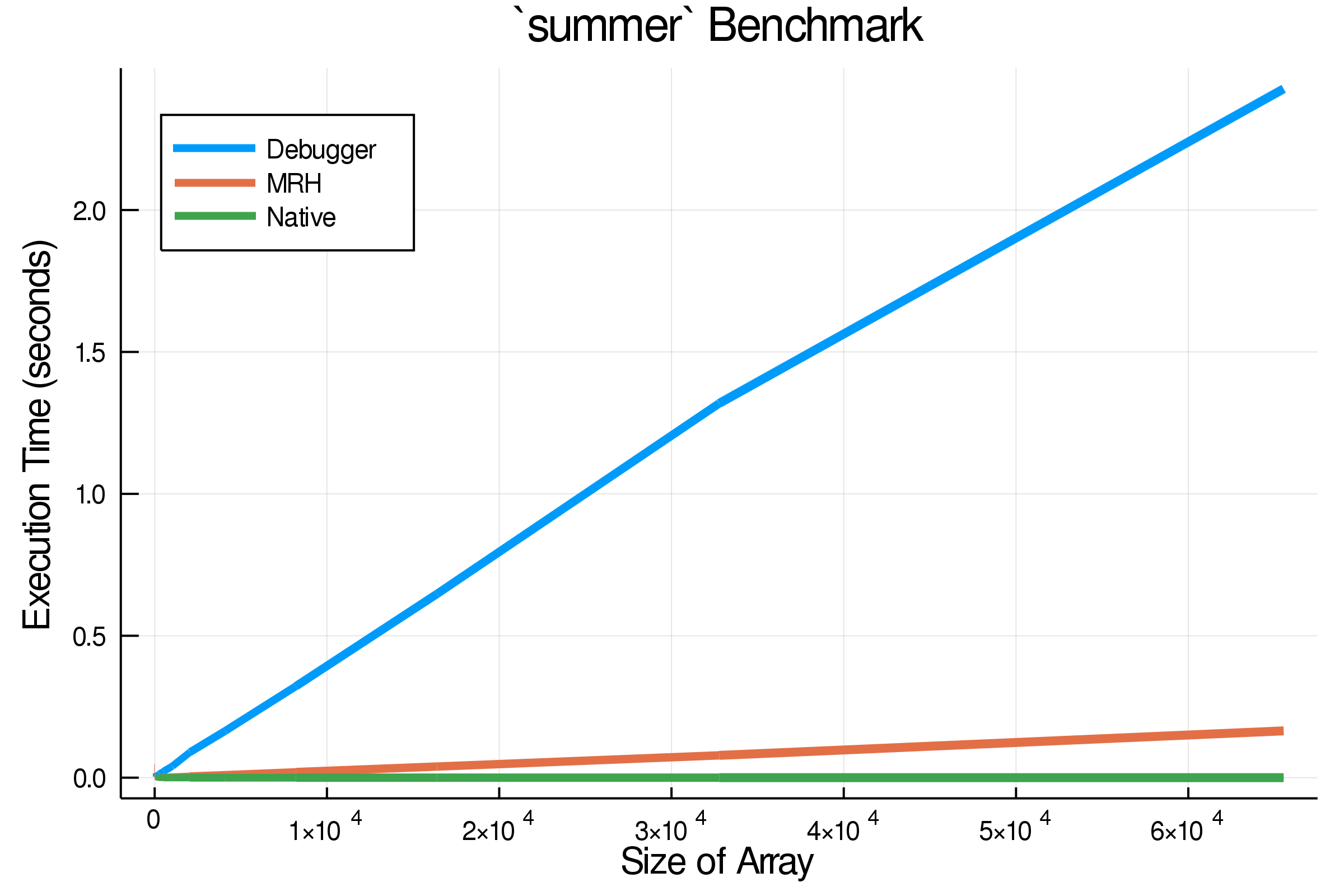 Figure: Run-time performance of JuliaDebugger vs MagneticReadHead, vs Native on the `summer` benchmark. With no breakpoints set. Note that on this task MixedModeDebugger performs exactly the same as Native, as there are no breakpoints set.

More on that pathelogical case and conditional breakpoints.

The key case where this breaks down is for conditional breakpoints in tight inner loops. There is some overhead for switching from compiled-mode to interpreted-mode. Normally this doesn't matter for two reasons:

However, if the breakpoint is conditional and the condition is not met then the first point doesn't apply. If it also is within a function on a function that is very fast (tight), then the second doesn't apply either. And if it (the call the the function is inside an This case is fortunately fairly rare.