AdFem is a finite element method open source library for inverse modeling in computational and mathematical engineering. It provides a set of reusable, flexible, and differentiable operators for building scalable and efficient simulators for partial differential equations.

AdFem is built on ADCME, an automatic differentiation library for computational and mathematical engineering. It was originally developed for prototyping inverse modeling algorithms using structured meshes but later evolved into a general and powerful tool with a scalable FEM backend MFEM.

Ad in AdFem stands for "automatic differentiation" or "adjoint".

As an example, we consider solving the Poisson's equation in AdFem

The problem is easily translated in AdFem: 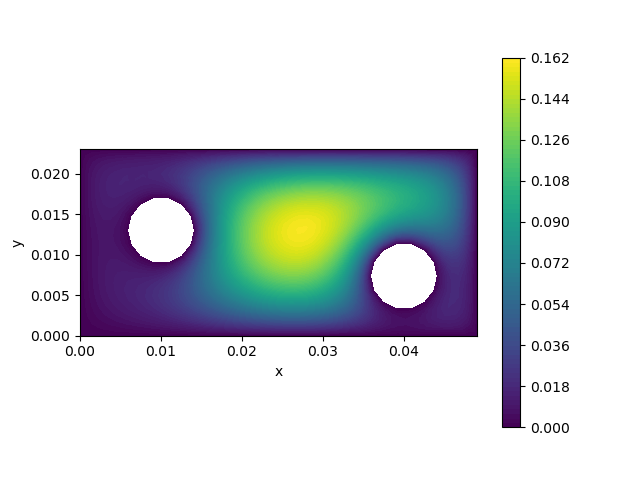 The above code shows how to use a linear finite element space to approximate the state variable on a given mesh, define boundary conditions, and construct the linear system.

Most functions of AdFem, such as compute_fem_laplace_matrix1, compute_fem_source_term1, and impose_Dirichlet_boundary_conditions, are AD-capable, meaning that you can back-propagate gradients from their outputs to inputs. This enables you to conduct inverse modeling without writing extra substantial effort once the forward computation codes are implemented. AdFem constructs a static computational graph for finite element simulators: the computational graph is optimized before executation, and all computations are delegated to efficient C++ kernels.

Here we use a deep neural network to approximate κ(x) (fc is an ADCME function and stands for fully-connected):

AdFem is tested on Unix platform (Linux and Mac). To install the stable release:

To install the latest version:

To install with docker, here is the built docker image provided by @Ricahrd-Li, and please see docker install guide.

Some related research works can be found here:

AdFem is licensed under MIT License. See LICENSE for details.