View5D.jl is a Java-based viewer for up to 5-dimensional data (including complex images). It supports three mutually linked orthogonal slicing displays for XYZ coordinates, arbitrary numbers of colors (4th dimension) which can also be used to display spectral curves and a time slider for the 5th dimension.

You can install the latest release via:

or for the developer version:

View5D.jl uses JavaCall.jl which needs a working java installation on your system. If you do not already have one, you should install OpenJDK and you may have to set the JAVA_HOME variable to the installation directory on Windows. 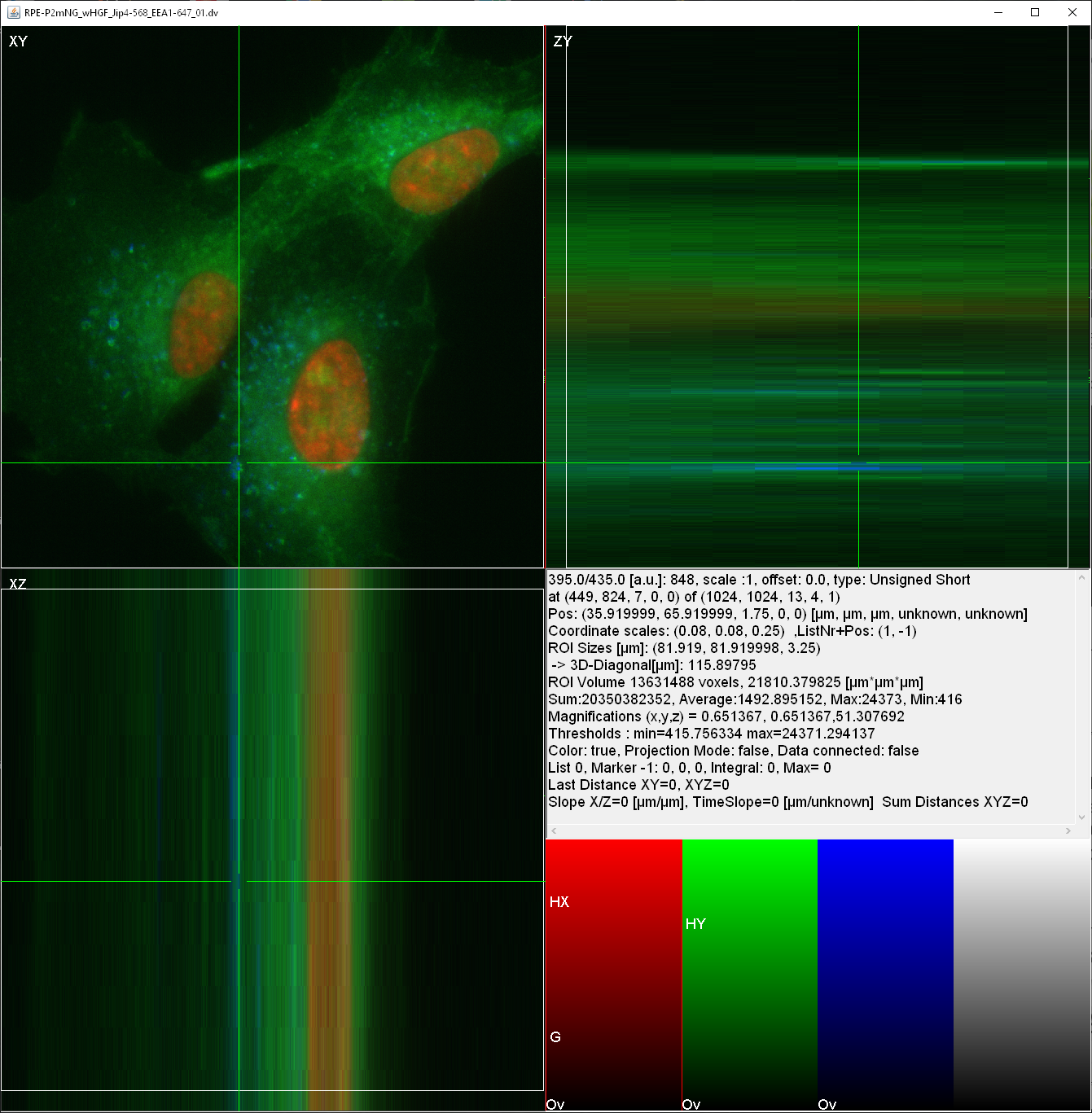 The interaction to julia is currently at a basic level of invoking the viewer using existing data. However, it already supports a wide range of data formats: Float32, Float64, UInt8, Int8, UInt16, Int16, UInt32, Int32, Int. Complex32, RGB and Gray

View5D also supports displaying and interacting with tracking in 3D over time (and other combinations) datasets. This can come in handy for single particle or cell tracking. A particularly interesting feature is that the data can be pinned (aligned) to a chosen track.

View5D has 3 context menus (main panel, element view panel and general) with large range of ways to change the display. A system of equidistant location (and brightness) information (scaling and offset) is also present but not yet integrated into julia.

Display of Complex-valued data can be toggled between magnitude, phase, real and imaginary part. A complex-valued array by default switches the viewer to a gamma of 0.3 easing the inspection of Fourier-transformed data. However, gamma is adjustable interactively as well as when invoking the viewer. The Java viewer View5D has been integrated into Julia with the help of JavaCall.jl. Currently the viewer has its full Java functionality which includes displaying and interacting with 5D data. Generating up to three-dimensional histograms and interacting with them to select regions of interest in the 3D histogram but shown as a selection in the data. It allows selection of a gate element where thresholds can be applied to which have an effect on statistical evaluation (mean, max, min) in other elements if the gate is activated. It further supports multiplicative overlay of colors. This feature is useful when processed data (e.g. local orientation information or polarization direction or ratios) needs to be presented along with brightness data. By choosing a gray-valued and a constant brightness value-only (HSV) colormap for brightness and orientation data respectively, in multiplicative overlay mode a result is obtained that looks like the orientation information is staining the brightness. These results look often much nicer compared to gating-based display based on a brightness-gate, which is also supported. Color display of floating-point or 16 or higher bit data supports adaptively updating colormaps. Zooming in on a colormap, by changing the lower and upper display threshold, for some time the colormap is simply changed to yield a smooth experience but occasionally the cached display data is recomputed to avoid loosing fine granularity on the color levels.

List of some useful commands to interact with View5D from julia