A module to perform DCCA coefficients analysis. The coefficient rho describes the correlation strength between two time-series depending on time scales. It lies in [-1, 1], 1 being perfect correlations, and -1 perfect anticorrelations.
The package provides also functions returning a 95% confidence interval for the null-hypothesis (= "no-correlations").

The implementation is based on Zebende G, Et al. DCCA cross-correlation coefficient differentiation: Theoretical and practical approaches (2013), and was tested by reproducing the results of DCCA and DMCA correlations of cryptocurrency markets (2020) from Paulo Ferreira, et al.

To compute DCCA coefficients, call the rhoDCCA function like: pts, rho = rhoDCCA(timeSeries1, timeSeries2). It has the following parameters:

Get the 95% confidence interval

The confidence intervals provided by this package correspond to the null-hypothesis i.e no correlations. If rho gets outside of this interval it can be considered significant.

To get a fast estimation of the confidence interval, call the empirical_CI function like: pts, ci = empirical_CI(dataLength).

For a more accurate estimation, you can call bootstrap_CI: pts, ci = bootstrap_CI(timeSeries1, timeSeries2; iterations = 200). This operation is much more demanding and can take up to several minutes. The iterations argument controls the number of repetitions for the bootstrap procedure, the higher the value, the smoother and cleaner the estimation will be, but it will also take longer. 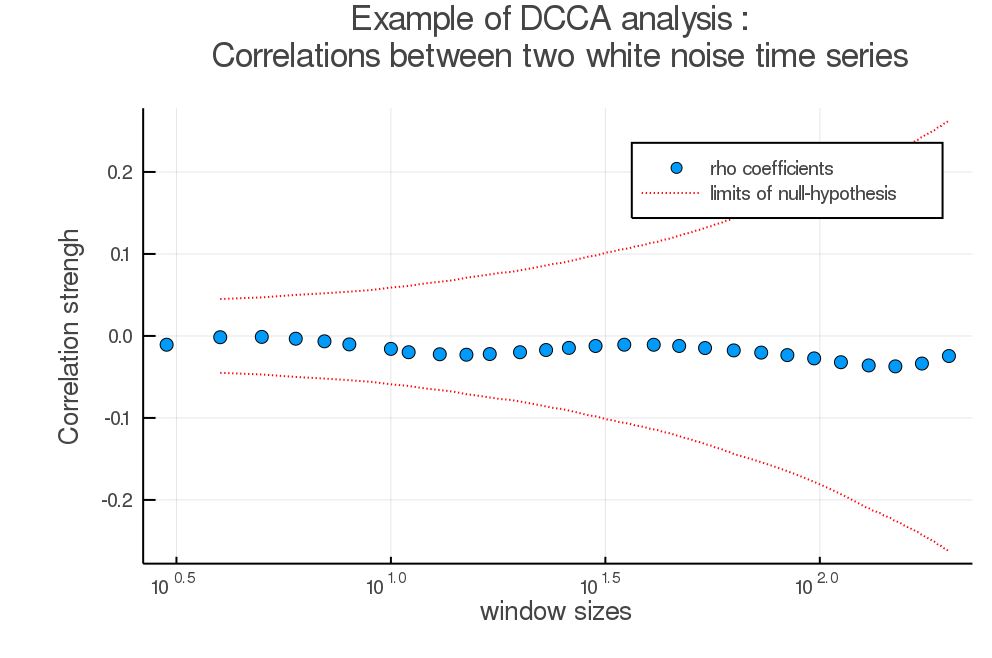 As noted previously, the value here lies in [-0.1,0.1] although we took here 2 series of white uncorrelated noise.