DeepDiffs.jl provides the deepdiff function, which finds and displays differences (diffs) between Julia data structures. It supports Vectors, Dicts, and Strings. When diffing dictionaries where values associated with a particular key may change, deepdiff will recurse into value to provide a more detailed diff.

Many users will likely only use the deepdiff function to interactively visualize diffs. For more advanced usage, the return value from deepdiff will be some subtype of the DeepDiff abstract type which can be further manipulated. These subtypes support the following functions:

Vectors are diffed using a longest-subsequence algorithm that tries to minmize the number of additions and removals necessary to transform one Vector to another. 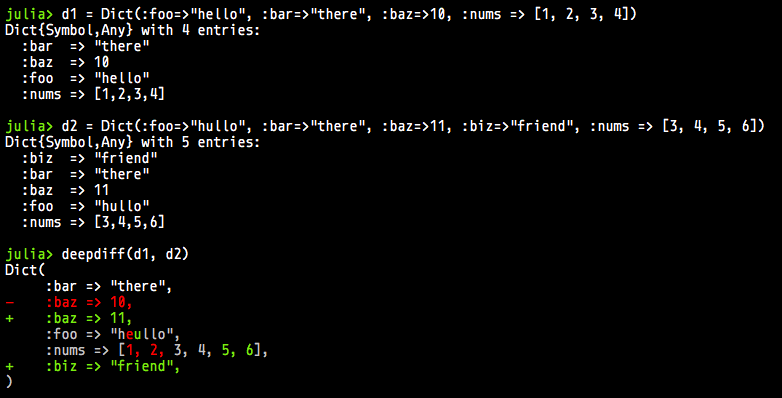 If color is disabled then the additions and removals are displayed a little differently:

Single-line strings are diffed character-by-character. The indices returned by added and removed correspond to indices in the Vector of characters returned by collect(str::String).

Multi-line strings (strings with at least one newline) are diffed line-by-line. The indices returned by added and removed correspond to line numbers. 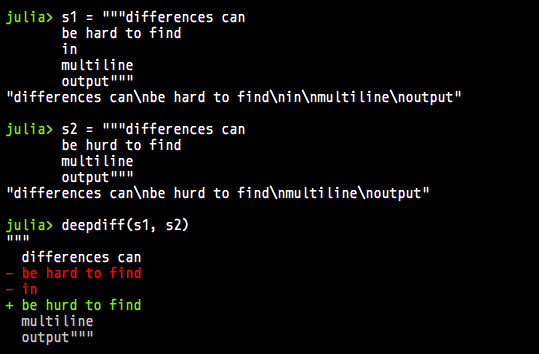